We want to recognise those in the community who are making a positive impact through gardening and all that it encompasses. So we’ve decided to launch Daltons Garden Heroes to celebrate those who are gardening for the greater good.

Each month we will profile someone who we think is a gardening hero and share their inspiring story with you. It could even be someone in your community. There will be a range of interesting people and their good work will hopefully inspire others and maybe spark a passion for gardening! 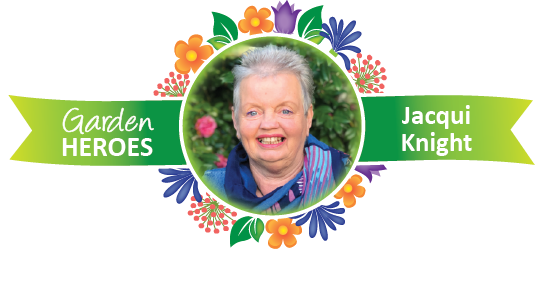 The “Butterfly Lady”, Jacqui Knight has dedicated almost 40 years to the protection of the monarch butterfly and NZ’s indigenous butterflies and moths. As our latest Daltons Garden Hero, we found out how her lifelong commitment to butterflies began and what lies ahead.

In 1984 while Jacqui Knight’s nine-year-old son Christopher was enjoying growing swan plants and raising monarch butterflies, he asked a question that would these days be answered by the click of a keyboard. In the days before Google, Jacqui had a much more complicated time answering - “where do monarch butterflies go in the winter?”

Jacqui and Christopher wrote a letter to the editor of the NZ Herald and Auckland Star who shared their question. They received mail from people all over the country telling him about monarch butterfly overwintering sites and Christopher was even interviewed on television and radio.

“One of the hosts, Jim Henderson (Radio Pacific) suggested Christopher start a club,” says Jacqui.  “Which we did, but after a few weeks, as kids do, he lost interest. “From then on I took on the challenge of replying to people, finding out the answers to their queries, and earned myself the reputation as the “Butterfly Lady.”

Jacqui’s passion and involvement lasted through the years and eventually in 2005 she started the Monarch Butterfly New Zealand Trust.

“The trust was established initially to ‘save the monarch butterfly’ but has morphed into the Moths and Butterflies of NZ Trust as we realise that New Zealand’s indigenous butterflies and moths are few and far between,” says Jacqui.

“Our mission is to support education, fund research and advocate for the protection and restoration of New Zealand’s rich diversity of moths and butterflies.”
The organisation has 10 trustees, a hardworking treasurer, plus numerous volunteers.

Jacqui’s roles, as a trustee and secretary, is very broad. It includes speaking in schools and garden clubs, editing the Trust’s magazine, answering all the public and media inquiries for the MBNZT and handling the social media. She also puts on popular displays at events like the Festival of Roses which is held in Parnell. The trust’s current major focus is on preserving the forest ringlet butterfly which is only found in NZ.

Jacqui says; “Most people don’t even know it exists. It’s the only one of its genus, and having no close relatives, it’s currently on its way to becoming extinct. We are trying to learn more about it and what is affecting its numbers,” she says.

There are over 2,000 of species of moth in New Zealand, of which Jacqui says;
“People are constantly discovering new ones– and they all have a place in our world. We need to have a healthy respect for our ecosystem.… we are all part of the environment and need to look after it much better than what we’re doing at present.”

Jacqui says Daltons support of the Moths and Butterflies of NZ Trust has been critical.

“They have been amazing, supporting my work leading a team of volunteers at the Blockhouse Bay Recreational Reserve where we’ve created some habitat, ostensibly for butterflies. We’re organic, and we’ve loved the addition of Daltons mulches and compost to get our plants well established. They have also been a great supporter of our BUTTERFLIES magazine for years.”

Jacqui has a love of gardening herself, passed down by her mother, which spans 70 years. “I’ve always had a passion for nature: birds, bees, outdoors, flowers and butterflies. I was taught many things by my mother, who likewise loved her garden. My garden is a wild garden – some of the plants in my garden most people would consider weeds, but I recognise their value. Stinging nettle of course is the host to the admirals, clover for the blues, and chickweed for my salads and the birds.”

The challenges and successes

When asked about some of the struggles she faces, Jacqui replied: “Being time-poor, there’s just not enough time or resources to do everything.”  Another challenge is of course the Trust’s need for financial support so it can continue its good work.

“Whilst we are always looking for increased financial support of the Trust, we welcome more subscribers to our magazine BUTTERFLIES. Not only do they receive the magazine four times a year with lots of information and ideas in it, but the subscription helps us complete our projects and work on other initiatives.” says Jacqui. In terms of success, she said “I’m thrilled at how far the Trust has come over the past 15 years. A long-term aim of the Trust is that we are very keen to establish the National Butterfly Centre, Te Matauranga o Nga Purerehua o Aotearoa. It would really be a dream come true.”

Jacqui gets a lot of questions about the most easily recognisable butterfly, the monarch.

“In spring when it gets warmer and the days get longer, monarch butterflies will return to your garden to breed again. They continue the cycle until the end of the “summer” when they sense it’s too cold and the days are too short. Those butterflies, probably the great-great-great-grandchildren of the ones that arrived in spring – will find a place to overwinter.”

Overwintering is typically referred to as a type of hibernation although it is not strictly so for monarch butterflies. They fly to warmer locations and can be found in trees in parks or reserves in large numbers to conserve energy and warmth. This helps them survive the winter months.

Jacqui’s top four tips for protecting monarch butterflies in your garden this season.

Moths and Butterflies of NZ Trust is currently selling a beautiful calendar for 2020 featuring original photographs of some of NZ butterflies and moths at $18 a copy. Go to https://www.monarch.org.nz/items-for-sale/ if you would like to purchase. Proceeds will help establish a National Butterfly Centre, Te Matauranga o Nga Purerehua o Aotearoa.